In the heart of the Draa Valley, Zagora is a pleasant stopping point on any trip through Southern Morocco. Under an ochre sky, the city of Zagora, swept by wind and sand, serves as a base camp for desert excursions on foot on the back or a camel or in a four wheel drive vehicle!
A few kilometres from the first Saharan dunes, Zagora boomed in the eleventh century when the Almoravids built its imposing fortress that protected it for centuries against outside aggression. The city’s shaded streets, running off from the central avenue Mohamed V, make it great for casually strolling about. It is best to enter the city centre from the monumental Ouarzazate gate. At the city’s southern tip you’ll find the famous sign that delineates the ancient caravan road to Timbuktu.

Excursion and bivouacs around Zagora

From the south-eastern outskirts of the city, climb the flanks of the Jebel Zagora. This is a beautiful excursion to be done early in the morning so that you can watch the sunrise and take advantage of the cooler temperatures (bring a flashlight). After an hour of walking, you’ll have a magnificent panorama over the city and its surroundings. In the distance, you’ll be able to make out the great cliff of Zagora.

A few kilometres south east of Zagora, go on an expedition to the Tinfou dunes! This little erg can be accessed by all kinds of car and is very easy to get around. Spend the night in a bivouac and spend magical moments contemplating the sunrise and sunset over the desert.

Not far from here is the city of Tamegroute, the region’s religious centre. This is the home of the desert’s first library, sheltering precious ancient manuscripts. Tamegroute is also known throughout the country for the expertise of its artisan potters. The road passes by the Tansikht bridge, that will lead you to the heights of the Draa Valley.

Next, head to Amezrou, a little village at the foot of the ancient “Jewish kasbah”. This huge fortress of the 12th century is built in the middle of a palm grove. Take advantage of its charming gardens to relax for a bit, and enjoy a spot of mint tea. In the heart of the village, winding alleyways lines with adobe houses will lead you to the mosque and its elegant minaret. The hit the souk on the little square in front of the gate to the desert (porte du desert).

Zagora has a small airport. You can also get there by road from Ouarzazate (95 km); the drive will take about three hours. Many forms of public transportation go to Zagora and there are daily liaisons between it and Ouarzazate, Marrakech, and Casablanca.
As the city of Zagora is over 700 m in altitude it is a little less scorching here than in neighbouring towns. It is still an arid climate however; summers are sweltering (35°C – 42°C), and in the middle of the winter the temperatures can get down to -10°C at night.

When travelling to Zagora during the month of June, don’t miss out on the Transaharan Film Festival! With some luck you could also witness one of the city’s famous camel races, held all year long! 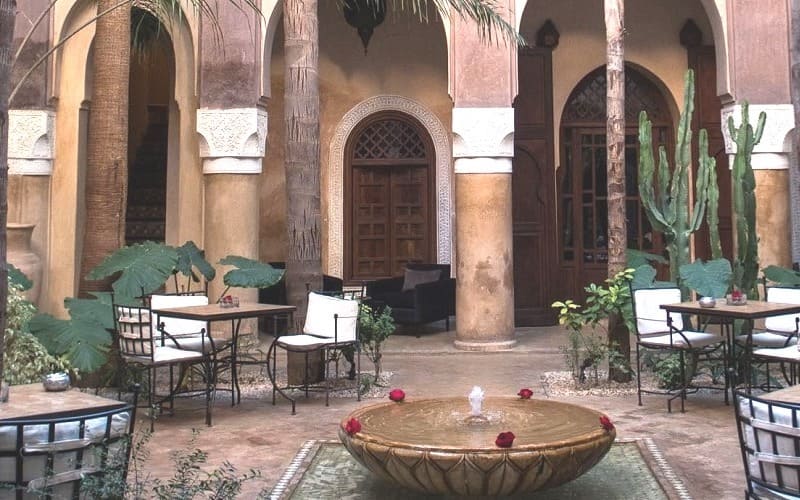